The Boring Company says its “not a” Flamethrower 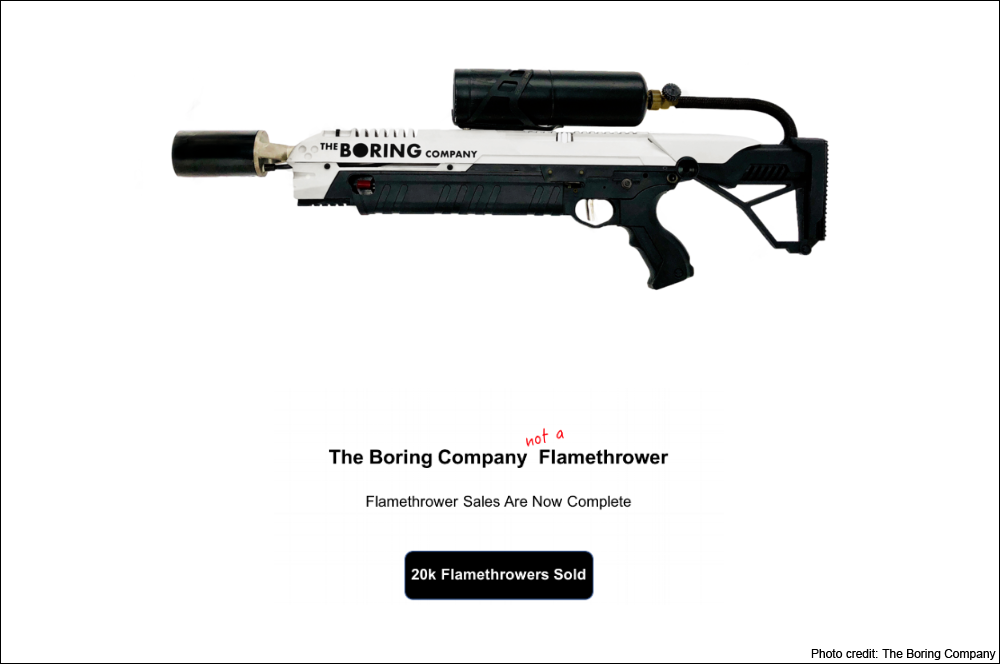 Remember when Elon Musk, the tech billionaire and chief executive of Tesla, Space X and the Boring Company, said he sold all 20,000 flamethrowers?

We do! Well, it seems like he may have a tiny problem actually delivering those units, or does he?

According to this article, after getting backlash from California lawmaker and assemblyman Miguel Santiago, who previously filed the bill AB-1949 to limit the sale of Musk’s flamethrowers in California.

Musk probably got a ear full from his lawyers, and decided to take their advice and change the name from “flamethrower” to “not a flamethrower”.

It doesn’t sound as cool but hey, as long as he’s in compliance we get our “not a flamethrower” that’s all that matters right? And our surrounding safety of course, while using it!

Continuing on from the previous article, lawmaker Santiago referred to the flamethrower as “incredibly insensitive, dangerous, and most definitely not funny,” in light of the worst wildfires to date which California recently experienced.

The article also points that after some modifications, the bill AB-1949 eventually made it to the Assembly Appropriations Committee on May 25, 2018.

Unfortunately for Santiago, the bill became a victim of the “suspense file” process where legislative leaders effectively killed off bills that may become an embarrassing vote for the ruling party.

On May 26, Musk tweeted that he would hold flamethrower pickup parties, with the first one being held on June 9, 2018, before shipping out the rest.

However, according to the same article, more resistance came earlier this year (2018), when a potential buyer voiced out on Twitter that ordering a Boring “not a” Flamethrower would be illegal.

Musk assured him the flamethrowers were legit because they only spewed out a flame less than ten feet long for safety and fun.

California law defined flamethrowers as “any non-stationary and transportable device designed or intended to emit or propel a burning stream of combustible or flammable liquid a distance of at least 10 feet.”

Since Musk’s devices emit flames at less than ten feet, the Boring Flamethrower is technically not a flamethrower, cited the original article.

Clever right? You bet your sweet buns it is! But when you’re as cool as Elon Musk, and you send a Tesla in space, you can effectively and swiftly think though challenges as such.

UPDATE: On June 9th 2018, The Boring Company announced that they will allow 1,000 of their customers to pick up their “not-a-flamethrower” from their headquarters in Hawthorne, California.

The rest will be shipped out in the summer.

Let us know if you will be attending!