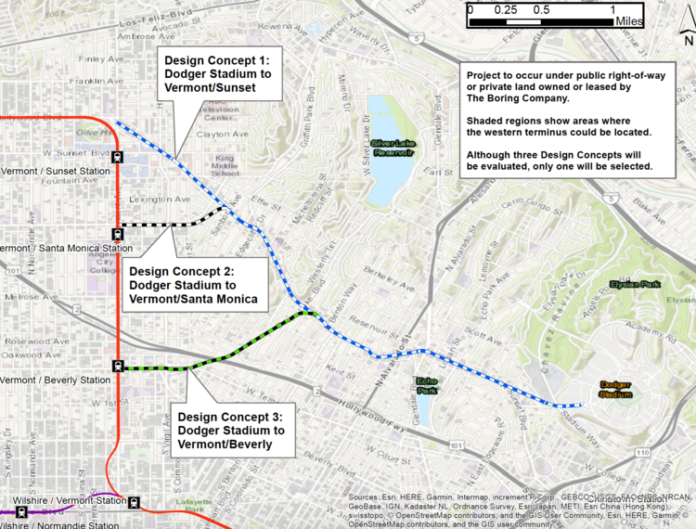 It’s been a busy week for the Boring Company, first announcing the opening of the Hawthorne tunnel site tours for LA County Students and also reveling their plans for an underground high speed public transportation loop to Dodger Stadium in Los Angeles.

In an exciting press release made on August 16th, 2018, The Boring Company announced plans to construct a 3.6 mile underground public transportation system that will take approximately 1,500 fans per game to and from Dodger Stadium (about 5% of the stadiums capacity).

The loop is described on the company’s website as a “zero-emissions, high-speed underground transportation system in which passengers are transported on autonomous electric skates traveling at 125-150 miles per hour.”

The entire trip is projected to take just under 4 minutes one-way and cost around $1.

Riders can reserve tickets through the Boring Company’s app or through their website before the game.

This comes as extremely refreshing news to fans who, for decades now, have had to battle hours of mind numbing traffic to get to and from games.

The Boring Company is working in conjunction with the city of Los Angeles to make the plans a reality and projects that the tunnel will take around 14 months to complete.

The company claims that no above ground traffic will be disrupted during construction and no nearby residents will see, hear, or feel the tunnel boring machine while it is working.

Plus, the project will be funded entirely by the Boring Company – which is incredible news and a win-win for LA residents and Dodger fans alike.

The project is set to be a replacement for the previously proposed proof of concept test tunnel running under Sepulveda Blvd.

In a statement on their website, the Boring Company states that they have made “technical progress much sooner than expected” and thus decided to make its first tunnel in Los Angeles one that is operational.

Both the Boring Company and the City of Los Angeles seem to be incredibly excited about making this happen, and we’re right with them!

It seems like the future is coming our way sooner than a lot of us thought, with the Boring Company leading the charge in slowly eliminating death-defying traffic in Los Angeles, starting with getting fans faster to the Dodger Stadium!

Big-ups to the The Boring Company!